The Full Guide on Netflix Recommendation Algorithm: How does it work?

Netflix believes it could lose $1 billion or more every year from subscribers quitting its service if it didn't use the Netflix Recommendation Engine.

Netflix believes it could lose $1 billion or more every year from subscribers quitting its service if it didn’t use the Netflix Recommendation Engine.

To watch or not to watch

We’ve all been there. After a long day’s work you turn on Netflix to find the show that you’re in the mood for. However, when you get to your home screen all of your recommendations have seemingly changed overnight. When wondering what to watch, it seems that Netflix has answered that question perfectly. No, it’s not because of chance, it’s because of data.

How Netflix gets it right almost every time

Netflix is an extremely successful streaming platform. The service reaches over 139 million paid subscribers across 190 countries. They are the world’s leading streaming service and the most valued, but there is a secret behind the wealth of achievement. Netflix has an incredibly intelligent recommendation algorithm. In fact, they have a system built for the streaming platform. It’s called the Netflix Recommendation Algorithm, NRE for short. This software is a key player in Netflix’s success.

The NRE is composed of multiple algorithms that filter content based on a user’s profile. The system filters over 3,000+ titles using 1,300 recommendation clusters all based on an individual user’s preferences. It is robust and it pays off considering that 80% of Netflix viewer activity is a direct result of personal recommendations. Plus, it saves Netflix billions of dollars a year by keeping subscribers from canceling. Here’s the rundown. According to Netflix, the company estimates that they have about 90 seconds to grab a consumer’s attention. In order to do this, they need to make sure they are promoting videos with a strong likelihood of being viewed. That 80% success rate keeps subscribers happy. Essentially, Netflix believes it could lose $1 billion or more every year from subscribers quitting its service if it didn’t use the Netflix Recommendation Engine. Still it makes sense, personalization is everything in today’s consumer world. Every digital platform utilizes it somehow, from Spotify to Amazon.

Personalization doesn’t just begin when you have been a frequent user of Netflix. From the moment you make an account the recommendation system is jump-started. This is why users are asked to select titles they like when setting up an account. Netflix wants to start recommending immediately to set themselves up for success.

Interestingly, it is not uncommon for these initial titles to be superseded once an account is in frequent use. This is how Netflix uses machine learning to keep recommendations up to date with user preferences. After all, tastes do change.

Once in the system, Netflix shows a viewer rows of content. These horizontal rows have titles that relate to videos in the group, almost like a category. Personalization comes into play by the order in which the content is arranged.

Each row has three layers of personalization:

The most strongly recommended rows head to the top of the page while weaker suggestions are pushed to the bottom. The recommendation system uses a multitude of algorithmic approaches to determine the order. Systems like reinforcement learning, casual modelling, matrix factorization and bandits are put into play to achieve the best outcome for the order. While these may sound like intimidating programs they all can be summed up as ways to ensure accurate data collection and processing in the algorithm.

The algorithms employed by the NRE aren’t randomly guessing, they are analyzing habits. Whenever a user engages with Netflix the recommendation system gages the probability of a particular title being selected. It does this by measuring data, and it measures lots of it.

According to Netflix, the information gathered can be any of the following:

All of this information is used as pieces of data that are implemented into an algorithm for processing. According to Netflix, they do not use demographic information, such as age or gender, as part of the recommendation process.

Netflix doesn’t just use data to determine likes and dislikes, it also helps Netflix produce more original content by using data to predict trends. It’s a sensible strategy, the company had to take a financial risk to produce content and they want to see adequate returns. Especially when the risk amounts to a whopping total of $13.6 billion for regular content and $5.21 billion in order to produce originals.

To mitigate risk, Netflix has begun harnessing user data to determine what content to produce. Their original content is successful 93% of the time. This is 58% more effective than a typical television show which is successful about 35% of the time. Netflix is producing content based on user data while traditional television programs produce based on opinion and luck.

Once a show is produced and released to the platform, Netflix employs user data once more. Data is used to create targeted marketing campaigns for their original content. It is not uncommon for Netflix to make over ten different versions of trailers for original content they are predicting to be popular.

We have all experienced it too. For instance, The Queen’s Gambit blew up on Netflix with over 62 million views and even placing top ten in 92 countries. If you were one of the millions who enjoyed it, it wouldn’t be random for you to then be suggested shows in a similar vein. Shows such as Peaky Blinders or The Crown are all fair game.

It’s all about what they have in common. The Queen’s Gambit, Peaky Blinders, and The Crown are all period dramas. Even better, Peaky Blinders has similar casting to The Queen’s Gambit. It is likely you will see Anya Taylor Joy in the trailer for Peaky Blinders even though she isn’t a main character. It’s all about data driven association. Netflix would learn that period dramas are popular with a user and even suggest shows with the same casting choices. They are using the success of one show to then bolster others, all based on data. Each associated choice has a 90% guarantee that a user will enjoy or at the very least click on the first episode.

It is all well and good to find shows easily and conveniently. The issue arises when Netflix’s algorithm goes too far. Many Netflix users suffer from content bias. For those who are unfamiliar, content bias is when Netflix begins suggesting content based on race. The issue becomes clear when diving into Netflix’s advertising practices.

These get mixed up in content bias when Netflix starts targeting based on race. In the artwork, Netflix may promote a Black actor in a show to a Black audience member or a white actor to a white member. Netflix claims that demographic information is not used in their algorithms but the evidence would suggest otherwise. For example, the film Set It Up has sparked a viral trend of users sharing their title cards and how they appear to be tailored to a user’s race. 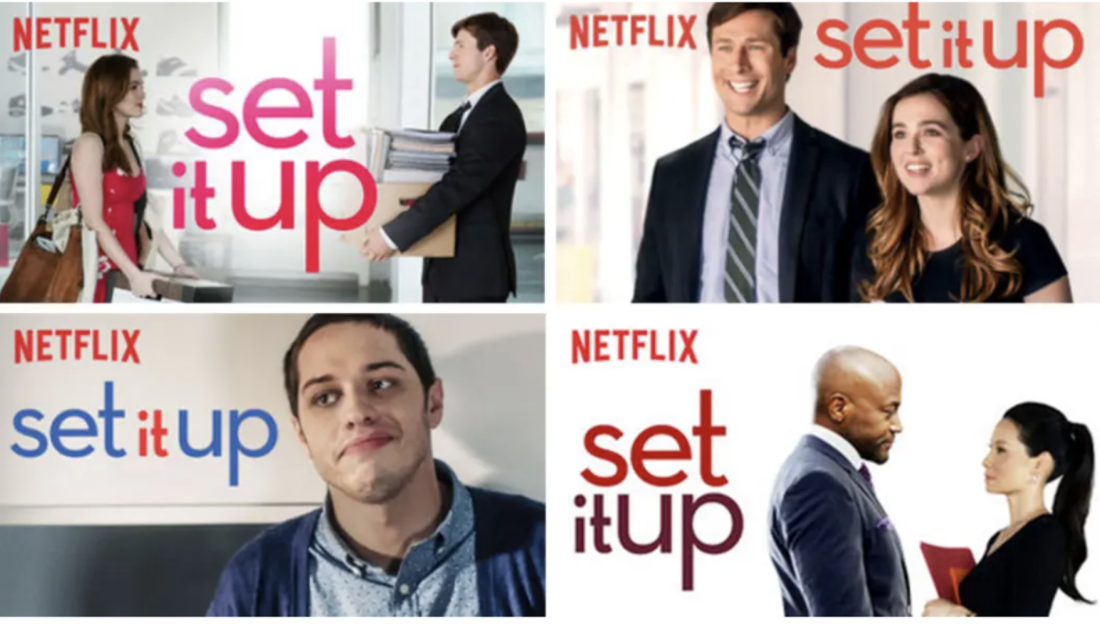 The film Set It Up has at least four different artworks all showing actors of different races and genders. Which one a user sees is often correlated to their race. Despite a Netflix spokeswoman denying claims, for many users it feels fishy. After all, it would make sense for Netflix to use artwork in any way they can as it is one of the strongest data points for views.

Many subscribers don’t mind the ease of finding relevant titles on Netflix. According to consumer reports, 74% of customers feel frustrated when website content is not personalized. The convenience is worth the data share. People only begin to get uncomfortable when Netflix takes it too far. For instance, in an interview with The Guardian, filmmaker Tobi Aremu said he felt “duped” by the targeting Netflix uses stating,

“If something is black, I take no offense in being catered to,” Aremu said. “I am black, give me black entertainment, give me more — but don’t take something that isn’t and try to present like it is.”

It is important to toe the line between making user experience convenient without overstepping. The issue is that algorithms don’t know when to stop as they are often programmed to collect as much information as possible.

Despite the social issue of content bias, the majority of users don’t report an issue with sharing or collection of data. Nowadays, 83% of consumers are willing to share their data to create a more personalized experience. It seems as though many are willing to share small amounts of personal information for a better user experience.

However, companies like Netflix collect so much more behind the scenes. Even still, 80% of consumers are more likely to make a purchase from a brand that provides personalized experiences. What’s more, 90% of consumers are willing to share personal behavioral data with companies for a cheaper and easier experience.

Our culture is becoming increasingly comfortable with the exchange of personal data. It certainly has its upsides and both consumer and company seem to benefit. On the one hand there is a massive increase in sales and consumers leave a shopping or viewing experience more satisfied.

However, it is important to consider just how valuable data is to corporations. It is the fuel behind day-to-day operations from what a company will produce to how they will sell it. Many give away their information for free. The power should be in the hands of the consumer, not the corporation. With Invisibly you can monetize your data. Start using Invisibly today to see where your data can take you. It’s your data, your power. Big tech & data,Everything Content March 17, 2022
In this guide, we cover all the topics you'd want to know about paywalls including what it is, types of paywalls, why it is important ...
Read More

Premium Content: What is it and Why Do Users Value it?

Big tech & data,Everything Content March 10, 2022
In a content-driven world, users are clamoring more than ever for higher-quality content. In this guide, we cover everything about premium content. ...
Read More

Content Sharing in 2022: What is it and Why is it more important?

Big tech & data,Everything Content March 9, 2022
Users love sharing content and do so consistently. This guide takes a deep dive into content sharing and why it's crucial in the digital world. ...
Read More

Big tech & data,Everything Content February 16, 2022
Monetizing your content has never been easier. In this guide, we highlight why content monetization is both the present and the future of the digital ...
Read More